As members of the Pterophyta family of plants, ferns have been traced back to the Carboniferous period.

That means they're more than 300 million years old. The coal and oil that we use today are actually fossil fuels, formed partially by the remains of those ancient plants.

Early on, some ferns learned to produce seeds and developed into the flowering plants; others continued to reproduce through spore generation. These are our present-day ferns.

If you prefer to read the quicker, more general Overview, click on this link.

The fern has two stages of growth, or two generations, defined by their autonomous ability to stay alive. The first is the gametophyte stage when it is almost invisible to the human eye, being only about .4 inches across (1 cm). The second stage or generation is the sporophyte stage, in which it develops into what we recognize as the typical fern. 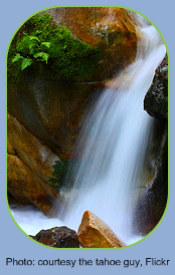 Each stage of the fern life cycle requires the right environmental conditions in which to continue its transformation, including enough moisture, lack of direct sunlight, and nutrient-rich soil. Only after a new fern has unfurled its fiddleheads and established itself is it strong enough to tolerate some direct sun without drying out.

To progress from sporophyte to gametophyte (and eventually back again), fronds develop sori (sing.: sorus), each of which contains clusters of (or single in some cases) sporangia. The sporangia are built with a stalk and a capsule, the stalk keeping it attached to the frond until it's ready to let go. The indusium is a flap-like tissue that acts as a protective covering for each sorus on most ferns. The Polypodium and Cyrtomium, for instance, are indusium-free.

When the sporangia are mature enough, the indusium withers and the enclosure opens, dispersing spores like a cloud of dust to the area around the fern, continuing the fern life cycle. The dust is then spread by water primarily, but also by wind, birds, and other forest creatures.

Almost all ferns produce one kind of spore, being homosporous. Each spore is haploid, meaning that it contains only one set of chromosomes. There are, of course, exceptions, but we won't discuss those here. 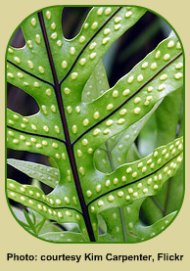 The spore then splits through mitosis and develops into a gametophyte, a heart-shaped, self-sustaining, small plant (under a half inch in diameter) using rhizoids to grab onto the ground. Rhizoids, or rhizomes, serve to position the new fern and to provide nutrition and water from the soil. Photosynthesis also helps to keep it alive.

The gametophyte is also called a prothallus, which is the body of the fern at this stage, usually small and flat, one- to two-cells in thickness. Although it's not yet a full-fledged fern, the prothallus is, in itself, an independent, self-sustaining plant.

On its surface, the prothallus grows archegonia, which contains the single egg, and/or antheridia, where mutiple sperm cells are produced. These are the female and male multi-cellular sex organs of the fern.

Of special interest at this stage in the fern life cycle is that the egg and sperm of a single plant often do not mature at the same time, which encourages cross-fertilization and improves the genetic strength of the plants.

When ready, the antheridia burst open, dispersing the coil-shaped sperm. Fern sperm are equipped with flagella, which allows them to move through moisture to find a ready egg - another reason why a wet environment is essential to successful fern reproduction. How the sperm finds the egg is believed to be how any male finds any other female - "chemical attraction."

The female archegonium, in the meantime, matures on its own time schedule. When ready, it opens its neck to provide a path for the sperm to enter and meet it. Fertilization occurs within the protection of the archegonium. 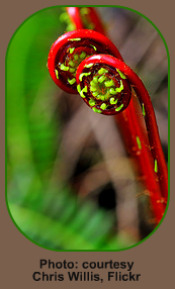 A zygote is formed (diploid) and divides rapidly until it develops into an embryo. When large enough, it bursts from its protective structure.

At this point the embryo grows into a new sporophyte and the prothallus disintegrates, as its job is complete. The embryo soon creates the familiar fiddleheads above the soil surface that unfurl into fronds, the "leaves" of the fern.

The above-ground fronds remain attached to the below-ground rhizomes (note that some ferns sport above-ground, creeping rhizomes, such as the Rabbit Foot Fern), which themselves become surrounded by roots, or a root ball.

As the new plant matures it grows some reproductive fronds called sporophylls that show spots called sori, the clusters of sporangia mentioned at the start of this page. Each sporangium then releases the spores, and the fern life cycle begins again.

Back to Top of Page

and their magazine is just about essential.
Keep up with new varieties to grow, techniques for planting,
and how to maintain the health of your ferns.
The magazine provides info for both
indoor and outdoor enthusiasts.

CARE for your HOUSE PLANTS

GIFTS for the INDOOR GARDENER